Ladies in Retirement – This production has been cancelled due to Covid-19 lockdown. 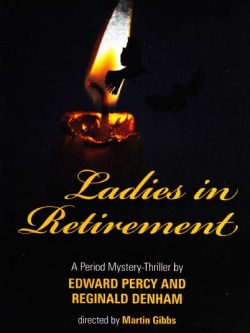 Set in an isolated cottage on the Thames Estuary in 1885, a former showgirl/actress, Miss Fiske, and her long-time companion and housemate, Ellen, become involved in competing schemes that grow more sinister after the arrival at their home of Ellen’s two sisters. A surprise turn of events will keep you glued to the unfolding story that has been described as one of the best stage thrillers of its time.
First staged in 1939 as England was starting WWII, London was in a blackout, and most theatres were closed it was an enormous hit, running for a total of 301 performances.