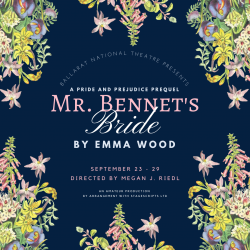 Have you ever wondered how a couple like Mr and Mrs Bennet ended up wed?

This is the story of how it all began.

The young Mr Bennet is under pressure to find a suitable bride, but his refusal to play by the rules sets in motion a series of events that are both comic and moving.

A Pride and Prejudice prequel by award-winning playwright Emma Wood that tells the story of how an unlikely couple like Mr and Mrs Bennet got together. A story applauded by critics for capturing Austen’s style, but still be accessible for those new to Austen’s works.

Reviews of other adaptions around the world give the script these reviews:

“…witty, charming and quite delightful… loyal to the Jane Austen style.”
“A clever and sophisticated script… Even the most loyal Austeniens would approve.”
“An ingenious look at Jane Austen’s characters.”