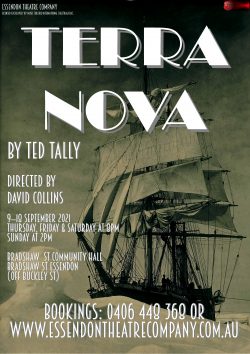 The story of Captain Scott’s expedition to the South Pole, his discovery that Amundsen had preceded him, the bravery and sufferings of his team, the self-sacrifice of Captain Oates and the final tragedy are recounted in a mixture of fantasy and realism which underlines both the human and epic qualities of the deathless adventure. In particular this is achieved by the presence of Amundsen, who appears in a variety of guises: chairman of a congratulatory gathering, as rival, even as a French waiter; and especially as critic, commentator, friend and monitor, when he is visible to Scott alone. Scott’s wife, Kathleen, also comes to him – as a bride, companion and mother to his son, Peter. The play opens and closes with Scott writing in the famous journal from which all the details of the final weeks are known. Period 1910-12.

Theatre restaurant style seating! Please bring along your own food and drinks to enjoy on the night. A small kiosk will be open selling snacks and soft drinks.

There are roles for 6 men and 1 woman