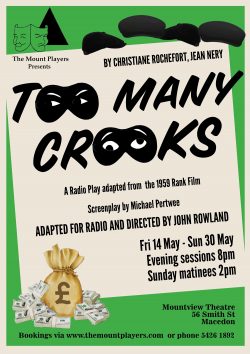 “Too Many Crooks” was a 1959 British comedy movie starring among others, Terry Thomas, Sydney James & George Cole. Director, John Rowland has adapted the script for the stage in the form of a BBC Radio Play.
The plot concerns a bunch of inept crooks led by an incompetent boss, who continue to botch straight forward robberies. When their plans turn to kidnapping, matters become overly complicated.
A hilarious farce with live, on stage sound effects…..just like it used to be!