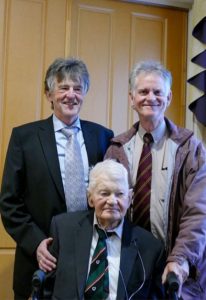 The VDL Website upgrade was assisted by generous funding provided by the Edwards Family in memory of life member Eric Edwards.

Following the passing of their father Eric, Geoff Edwards and his brother Russell agreed that in memory of their father a substantial gift to the VDL would be made to assist in financing an urgently-needed upgrade of our website and systems which would bear reference to the Bequest of Eric Edwards.

Formerly an accountant, Eric began working voluntarily three days a week in the VDL office where he worked unpaid for about 10 years. He became absolutely invaluable to the VDL.  Eric was also involved with St Stephen’s Players on set building and then acting in plays, something he hadn’t intended to do but when asked he ‘stepped up.’

Eric continued to generously spread himself around, assisting family, friends and others who had a need until he passed away at the age of 101 years 3rd August 2017. He had acted, managed our finances and was a life member of the VDL.